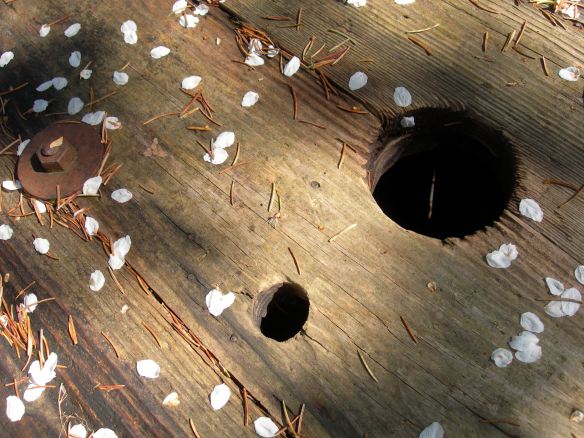 The most beautiful woman sits across from me on the bus. Arched eyebrows, skin the color of dark caramel.  Cream scarf caught around her neck and jacket with a ruffled collar that I would, in no way, be able to wear.  I expect her to get off at the first stop, or the second, but as I leave she remains seated, she moves along the arteries of the city and disappears.

Downtown, the tops of the buildings are caught in mist.  Grey day in Seattle, no surprises there.  It seems a day for magic, for things to happen.  I am not the beautiful girl on the bus, but she exists and I know nothing about her, I will never see her again.  She is perfect in my unknowing.

The cherry blossoms are giving way to leaves, and white petals shower off of trees I cannot name.  Dogwood? Myrtle? Last night a man told me he remembered kissing my neck, the salty taste of my skin.  He could have waxed poetic; told me about oceans and brine and the way our bodies are like water, continually renewing.  He didn’t.  I remember the collision of our bodies differently–the night thin above our bodies, the way I wanted to claw out of everything.  Depression is a funny thing, so thick and present when caught in a backwards glance.

I have been told I am like the wind, moving constantly. A creature of air and current. I remember my mythology, my fairy tales.  There are so many winds, drawn with puffed cheeks and billowing beards.  The wicked and cold North winds, the warm and kind South winds.  Wind that is caught carefully in a sack and released at the wrong time, wind that carries forlorn brides to distant lands, repentant and clutching tallow stained shirts.  East of the sun, west of the moon.  To the ends of the earth.

Outside the flags barely move, they shift limply on their poles, they hang listlessly.  The glass walls let in fogged light only slightly paler than the grey carpet, than the off-white metal girders.  My body is not wind, is not water, is not anything but sitting here, solidly in a corner.  I want to know where the woman was going, I half expect her to walk past me here, clutching a museum map, her reflection multiplied across the metal skin of planes.  She has vanished into the city, beyond the city.  She is drinking coffee, her lips marking the edge of the paper cup.  She is reading a book, turning each page slowly.

I remember my fairytales.  A girl wanders into the woods following the next flower.  Clutching her treasures to her breast she is lost and confused and at the periphery wolf-teeth glint.  Skin the color of fresh snow, lips the color of blood.  The horse head that speaks to the goose-girl, a hidden princess.  In fairytales, there are central characters and the background fades into a tangle of brambles, into the vast ocean between the house of the sun and the house of the moon.  Would I be Snow White, that princess Aurora, or would I be a maid simply cleaning the flagstones as sleep descends in its spell-filled cloud?

[I have begun to write at work. My real job at my paying job. The language is a bit stilted, the threads meandering, but at least I am keeping my mind active.  I don’t know what use most of it has, so I suspect it will end up here.]