I’m on the train to a soccer game in Brazil. The train sways along the track and Corinthian fans fill the car slowly as we get closer to Arena Corinthians, their black and white jerseys marking them easily. I’m with co-workers and it’s my first night in Sãu Paulo. None of us are extreme soccer fans, but some watch enough to have favorites. “Ah Pelé!” says one.

Pelé. Ah Pelé. And I am acutely embarrassed as soon as I hear the name.

In middle school, I didn’t fit in, but no one fits in. Everyone has horrors and embarrassing moments, and everyone tries to forget. I had many, but one was soccer. I was always decent at running.  This meant I tried to play soccer at lunch, with the rest of what felt like everyone. And at some point a blonde boy started to call me Pelé. I thought he was laughing at my sneakers – knock-off Vans from Payless. I thought he was teasing me because I wasn’t wearing something cool—and I could handle that. I could handle it because I was faster, and because I thought I was decent at soccer, even though they never passed to me, even though they didn’t want me around. (I say blonde boy because I can’t remember his name now, just that he had cropped blonde hair. I don’t want to think about who he was too deeply. If I do, he might be one of the shining faces I see now on Facebook, an adult, happy with a family and a life and I am happy for that shining face and his success. I don’t want to remember who he was.)

Of course, children are crueler than they know. And I remember being at a party of some sort with my parents, in the rec room with the kids. The kids were rabid soccer fans and they had huge posters on the walls with names in banners and gushed about their favorites, and king among the favorites was Pelé. I realized, with horror, that the boy was calling me the name of the greatest soccer player of all time. Which meant, of course, that I was nowhere near good. I laughed off what he called me and I convinced myself it was a nickname I could handle. I don’t remember trying to play soccer again.

In college the soccer team practiced in the fields next to where we gathered for cross country. By the end of my four years at Moravian, I counted many of the players as my friends. Nearly a decade later, one of best friends in the whole world is one of those soccer players. After my coworkers and I get to the stadium and walk through the crowds and vendors selling roasted meat and soccer flags, I text my friend “I’m at a soccer game. In Brazil.” I can’t wait to tell him about it when I get home, as if reporting back from some recon mission. I don’t join the chants- I still feel like an imposter. I also don’t know the language and I’m pretty sure the crowd is shouting something awful. I know if my friend were here, he’d laugh at me, he’d shout along, and he’d give me a big hug. And he’d probably start calling me Pelé just to prove that a name isn’t anything to be afraid of. 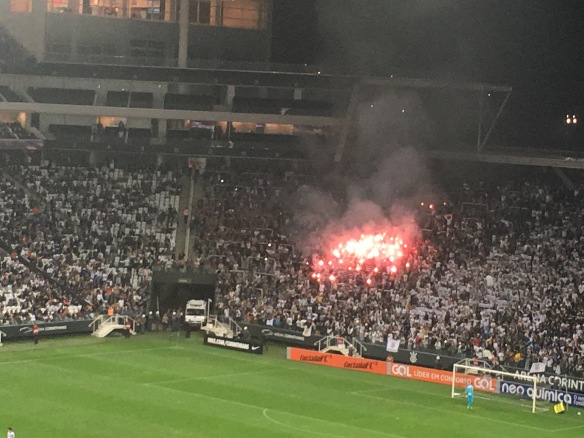 Flares by… our own fans? Not really sure why but the crowd wasn’t pleased

Waiting for the game to start

The entire outer wall of the stadium is an LED screen