I used to be a runner. High school and college were scheduled around practice and meets.  I had a near permanent sports bra tan and my car was constantly full of discarded socks and a spare change of clothes. Then I went to grad school and running in the summer heat was just too oppressive, the roads were unfamiliar and although I talked to the coach of the team at UCR to try to volunteer, nothing came of it and I slowly fell out of habit. Running was still where I found solace—when I found out my dad had cancer I pulled on my sneakers and ran through a hailstorm around Green Lake and had welts on my arms and legs for days after. I ran with my roommate and used to promise myself that my wishes would come true if I could stick with him but he always outsprinted me and, in a way that I should have seen symbolic, I was left chasing him, collapsing on the grass to stretch when I hit the sign that marked our stopping point.

Then I found climbing and I got distracted, running sporadically. A 5k here or there, a few months of morning runs before letting sleep take back over, but it felt wrong to say: I run. I started doing more mountaineering and any running switched over to hiking, with a quick sprint thrown in once a month or so if someone asked me along for company.

But then Cate asked if I wanted to do the Headwaters Relay. A three day relay race across a state I’d never been to in the heat of the summer. Grueling and dusty, with an average of around 10 miles a day if we could find enough teammates, more if we were short. And of course I agreed, because I love relays, I love seeing friends, and I’d never been to Montana. I somehow convinced Devi that it’d be a good idea and we started running together at work. And throughout… my Achilles were nagging, hurting enough that I never went as far as I thought I should.

Yeah. Tendonitis. I should have known.

As the relay approached I knew I couldn’t run it—my PT kindly said “sure, we can consider it” but he and I both knew it wasn’t going to happen. Luckily Cate said there was room and I came out anyway to support the team.

It turns out that NOT running a relay race when you imprinted racing on your blood and body during some formative years is really hard.  I wasn’t quite sure where I fit in to the team—especially when even a sprint to see the start of the race hurt. So I cheered as loudly as I could, I drove when no one wanted to, I jumped in and out of the car to bring water and I tried to photograph everything while everyone else was just trying to make it through the dusty Montana landscape.

I’m excited to go back next year—and it reminds me why I’m doing this 8 week training program with Paige, even though I hate gyms and even though I really miss being able to eat whatever I want. It’s worth it. It will be worth it. Next year I’ll be as sore and exhausted as the rest of Team Honeybadger was. I can’t wait. 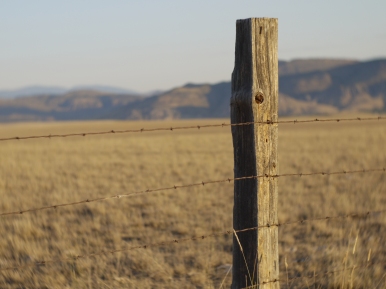 Beth trying to catch up on sleep.

Waiting for Jesica to come through the mountains, finding what shade we can.

Beth coming in strong, Jeff about to start.

Jeff finishing up with a beer- as required. 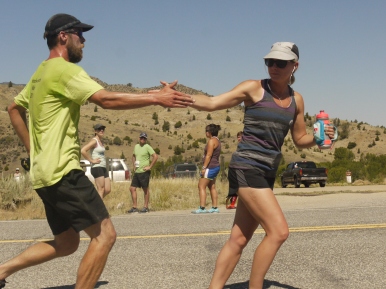 Jeff and Lo with the best relay exchange of the race.

Just in case you weren’t sure which way to turn.

Melisa finishing strong at the end of Day 2 with her girls holding the banner.

From the camp site at Day 2.

Rays of god above camp 2.

COWS. They make such silly noises.

Cattle grates are hard to run over. 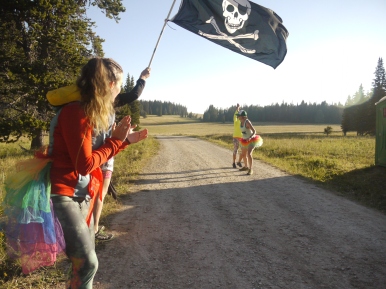 I made a new friend.

All of us, minus Jeff, because he’s running in.

Jes’ hand, Jeff finishing up. Not bad for being at +9K feet.

Yeah… so our car battery died. Walking the final mile to meet our team at the finish line.