The morning starts quietly, predawn. I slip out of bed without disturbing the dogs or my boyfriend and jump in the shower. My clothing sits folded on the dining room table, my packs are slumped by the door, my keys in the fridge next to the raspberries so I don’t forget them.

By the time I make it to Gary’s house for our carpool I’ve set off three smoke detectors, torn the venetian blinds off of the kitchen window trying to undo the latch and put a hot pot on parchment, singing a brown ring and nearly burning my hands. Here we go. WAC 2016.

We assemble at Guye Cabin in Snoqualmie Pass. It’s hard to tell if it’s rain or slush that’s pouring out of the sky as we shoulder our bags in to the cabin and take off our boots. Already I can hear voices I’ve missed, the folks that left slightly earlier than us or spent Friday night up here to avoid an early morning drive. We head up to the bunks and lower the wooden platforms to put our sleeping bags and extra clothes on.

The living room is already cozy and starts to fill up. You can hear the excitement in our voices and see it in our postures. We give each other quick recaps of what we’ve been up to, our lives between when class ended last year and this moment, when we are at the precipice of trading places and becoming instructors ourselves. We start with our knots test and the chatter move in to a quiet lull until someone burst out laughing and talking starts back up.

A year ago, we were all strangers. When we break to run teaching scenarios it’s hard to pick someone we haven’t worked with before. Over the course of the weekend we run through glacier rope up, z-pulley, self arrest, and low angle ice. We practice kicking steps and mock through rappels with ropes looped over pipes for anchors, swapping roles between instructor and student, giving feedback and pointers.

At night I wander the cabin, moving from room to room. In the living room bodies lounge across old couches and discuss plans for later in the class, tossing out ideas for locations and debating the finer points of pulleys. In the dining hall a few folks laugh to the point of tears. Outside a pit has been dug in the snow and there is a fire, smoky by the time I get there, pouring warmth in to the night. There is a phone leaning against a shovel to make an impromptu stereo and it plays thin music barely audible past the fire. It starts to snow. When I wake up the next morning my hair still smells like smoke.

The next day the snow continues. I am on a set up team and we stomp out in to the morning with wands and pickets to set up a fake glacier. We make hairpin turns and try to draw crevasses in to the snow. Every so often I remember to look up and remember that I am surrounded by the mountains of Snoqualmie Pass. It never stops being beautiful.

There is no grand lesson from the weekend. Things went slightly wrong, things went better than expected, it was a good weekend spent training. I’m excited about what this year will bring. 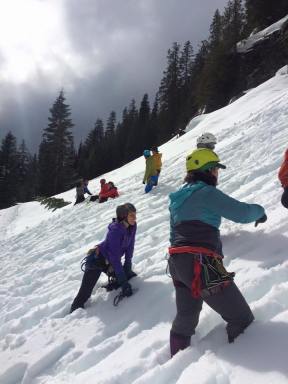 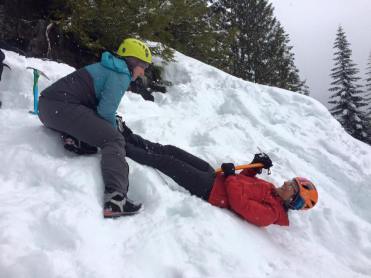 Jodie about to self-arrest

Kyle didn’t tell me to make a funny face. Only Jenny got the memo.

Recap at the end of the weekend
Advertisement