What have I done, into the darkness? Into the place of fear and terror? Into that place of uncertainty where you aren’t quite sure you’ll make it out alive?

There is a reason I give my watercolors away. They are dances, they are whimsy.  There is no danger in my collage work, pierced with thread as it may be.  There is nothing scary about an insect drawn in ink and watercolor, captured by tissue overlay.  There is peace, perhaps. There is beauty.

Art should be dangerous. I don’t mean that the result should be terrifying or risk actual injury— and maybe this is where I’ve been going about it wrong.  But something in the process should scare the creator. You should find yourself in a dark room, unsure if the oxygen is leaking out. You need to risk.

I remember writing the phrase risk everything in my notebook on the first day of graduate school. I wrote recklessly, I used anything that was part of my life to thread through text.  Everything was fair game.  We risked, yes, but we risked safely, to an audience that was with us, telling us, this risk is something I am doing too. I am with you. I wrote recklessly, and I published, and in the time it took for a collection to take hold and for it to be in my hand, I’d left a man I loved, but there was still love. Until he called me and said how could you?

I’m only now re-emerging from that question, trying to step away from the guilt.  Writing is exposure.  To write, you burrow down into your body and flay it open.  The problem is—fair game.  To love me means to risk that knife at your skin.

What is my terror? My fear is to be forgotten, to be nothing.  That’s every writer’s fear—that we have nothing of us left behind.  That we go gentle into that good night. We want to rage, we want that fire to be seen.  What happens when we’re also afraid of fire, when we sit with buckets to douse, in fear of the flame overcoming? In fear of the flame immolating not just our own bodies, but those of the ones closest to us?  We go a little quieter. I go a little quieter. A friend told me you are like a fishbowl without the glass.  A friend told me you crave too much attention. A friend told me you finally found your voice, I want to read it all.  The problem with a fishbowl is that it’s supposed to be made of glass, it’s supposed to keep some things inside.

Tonight I tried to tell my aunt about exhaustion, about the performance of exhaustion. I’ve been sleeping a lot, I’ve been moving slowly.  I’ve been so tired.  And so, then 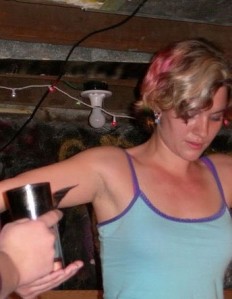 what? There needs to be something generative from this place, this thinness, this transparency.  I keep thinking about a performance in college, where the audience was with me, against me, and then with me again as my body flushed and shook, as my muscles gave out. The problem, I said tonight, was that I was too strong. I didn’t see the performance through to the point where I had no choice.  That night, the recording ended and I dropped my arms, the dictionaries clapped to the ground and the performance slammed shut as I buckled my knees and slumped to the floor.  I fell because I chose to, not because I had no choice.  After the smattering of applause I stood up, I cleared the stage.  I could still move, I was not yet exhausted, I was performing at exhaustion, I was performing at surrender.

I don’t know that I have the strength to surrender choice.  This is why I am scared to lead climb—I am scared to fall.  I push to the edge and then back down to safety.  Down climb to where the rope will hold me instead of surrendering to the air.  Maybe this is why climbing has become my poem—I can physically approach that terror. I can touch the edge before backing down.

I am trying to trust my body more. I am trying to trust words more.  A friend asked me if I considered myself a good writer. Sure, I guess, I shrugged. Would you say you’ve mastered writing? he asked.  Not at all! And he ran through numbers until, cornered by science, I admitted slowly, in stages, that I’m good at this thing. A man came up to me at a bar and said How was the gym tonight? and when I was confused said, I know you, you’re one of the strong women who climbs at Stone Gardens. No, I’m not. Those are the other people, the ones I learn from, the ones I am nowhere near touching.

That internal editor. That little censor.  That voice telling me you don’t know enough, you aren’t strong enough, you should edit again, the line is shaky, the composition off.

What have I risked of myself lately for art? Not enough.

*The German Forest is what the folks at Radiolab call the terrifying place when a story is lost.  The phrase comes from an experience during an investigation into Wagner’s Ring Cycle. Thanks to Jad Abumrad and Zoe Keating for “Embracing the Gut Churn” at Benaroya Hall (9/30/14).

“Art is a way of experiencing the artfulness of an object; the object is not important.”

I am turning into wind, I am studying the empty stage. I don’t mean to giggle at theory—but the artfulness of an object. The inherent joy of an object losing it’s objectness into artfulness. My body an object turning into wind even as it curls against a sturdy futon mattress, beneath a woven blanket that felt grass and sun through summer, spread at a park, a Frisbee flying between bodies, a dog curled in the shade.  The rain outside falling falling. Ice in my glass melting and the glass sweating against a coaster, as if the coffee table is worth protecting. My lips taste like lime.

There is a difference between entertainment-theater and theater-art. I never thought about the way theater migrated from text. A writer, not thinking about the migration away from text? Even as I find words limiting, even as I push words out of my body to feel the motion of my bones again. My mind moving away from text.  A teacher and friend from graduate school, reading on a stage. He tells me after, as I stand in line to say hello, you’re smiling more than I’ve ever seen. Keep climbing. That’s your poem. He turns to my friend, see how happy she looks? I remember clapping my hand over my mouth in the middle of the evening to stop a burst of laughter. One doesn’t laugh at a poetry reading. And then releasing the sound into the darkness, because JF was laughing too. Poetry is more than a page. Let’s move away from text. I mean to say, this thing on a stage is more than entertainment. (That thing? I read a story on the shores of the ocean, between a teacher and student. This and that. How this is an intimate gesture, including an object into your own world rather than pushing it into that. This stage.)

I’ve always been slightly uncomfortable around theater. This is despite the way I found myself on a stage, my arms covered in air vents, or my hair bright blonde and teased into a Blonde Character, or kneeling as a fence post in a children’s theater production of James and the Giant Peach. I’ve been in plays, I’ve sung the songs, I’ve danced in black heels made for dancing.  I clapped coconuts together and put on my best Monty Python accent. Are you suggesting coconuts migrate? Cue laughter, because I know this script, and we know the way it plays. I’ve never been able to commit.  Fear of losing myself, fear of the way a self needs to dissolve away into someone else. Self-aware fencepost. Robot with human heart. Cloak of uncomfortableness, settled around my shoulders.

I read about theater as audience becomes actor—the tricks of the Dada movement. Put glue on a seat. Liberally distribute itching powder. Audience begins to act. To react, the audience breaks the wall because they cannot sit still (or they can only sit still, glued as they are.)  I read about Marina Abramović and the audience finally intervening, covering her with coats, carrying her bleeding body off. I imagine myself in the audience—would I move forward to stop something that is Art? I imagine myself Marina. Would I slice a star into my stomach for Art? 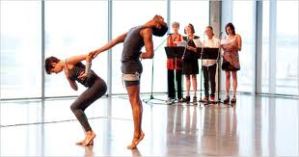 I am shocked that I haven’t returned to Anne Carson yet—the queen of my heart. The way she plays with space—beyond page. A poet who forces the page away. The text is not privileged. I am laughing at theory, curled on my couch, and Anne sits on my shelf, pressed into pages. How can one read about a movement away from text? Giggle. Take a sip of gin. Read more about how text is unimportant, how the movement matters. Read movement.  Are instructions for a performance the same thing as a performance? A friend sends me Bruce Nauman’s Body Pressure. “Press as much of the front surface of/your body (palms in or out, left or right cheek)/against the wall as possible.” I read and feel the wall. The futon against my back. This is my performance, for an audience of self, for a quiet, gin filled audience, giggling into a rain filled night.

The problem with reading is the way research begins to spider web. I begin one book and now have Rilke and Viktor Shklovsky, Carson and Marina. I have a collection of short stories and a dance performance. My table is stacked, my gin has run out. This isn’t a finished thing, there isn’t a curtain to drop, I’m not sure who the audience is or when s/he will come wheeling in to cart me off.  This is the fun part of a project, the formation.