I’ve never been to a one-night, star-studded workshop before, and I’ve never been in a workshop with someone I’ve held on such a high pedestal as Anne Carson.  I was beyond nervous going into the thing—reading and re-reading the workshop description to make sure I would arrive with everything I needed (nothing) and that I had the time correct (I did).

I didn’t expect her to be so entirely likable.  When she speaks it’s slowly, with thought, but her whole presence is laughter.  I didn’t expect to leave the workshop questioning everything I used to value.

The reading wasn’t a reading, but a performance of two lyric essays and a premier of performance inspired by Cycladic Sculptures. For as much as I love Carson’s work, I don’t think I’d ever heard her read before—her voice startled me.  The performance was at points mesmerizing and at points distracting—at points full of tension in an interesting way and at points full of tension in an uncomfortable way.  Sitting between my aunt and uncle, very used to this type of event, and G-, very not-used to this event, I found the funny moments even funnier in their oddity.  I think I giggled a lot, both aloud and silently. When it ended the four of us walked into the balmy Seattle night with a volley of comfortable conversation—I was elated and by the time I walked into my apartment I was distracted in the best giddy kind of way.

Jump cut to the workshop—I showed up early but not too early (carefully timed) and the folding chairs slowly filled up.  Mostly women, mostly in their late 30s, early 40s? I’m terrible at ages, but everyone seemed, for the most part, slightly older than me. I don’t really know what I expected, but I was surprised at the lack of diversity.  We were all in our uniforms and it read as such.  I felt both overdressed and underdressed. Too polished. Makeup was a bad idea. I should have worn flats instead of heels, what was I thinking. It’s a workshop, none of this matters. But you could tell it did—we women broke out our Statement Earrings and our Flattering Yet Simple Dresses.  Not everyone, I’m making a gross generalization of course.  But still.

Currie started with a video clip of a previous performance—the dancer went off script and began to dance a solo behind Anne and Currie.  They only found out when someone sent them the tape—what a happy accident! And then, let’s begin.  The workshop, of course, will be collaboration. But first—as we hand out scraps of paper with marks on them, how many were at the performance last night? All hands raise. And, what didn’t work?

Dead silence. We, as a group, are supposed to critique the piece? The piece written by the illustrious Anne Carson? And Currie casually asks us, what didn’t work?  One of the two men finally spoke up—I was annoyed at the game of the new piece.  And then it began.

It is comfortable for me to slip into workshop. I love getting to the point in a discussion where you get past the beauty– where everyone agrees to say fine, the piece has beauty, that’s a given.  But how do we tweak it to make it stronger, better? What isn’t working, and how do we make this work? And I jumped into the fray, and it felt good. High hopes!

In retrospect, I see where I went wrong.  I signed up for a workshop on collaboration thinking it would be more about movement—I wanted to see if it would help me thread together the things in my life. Weave climbing into poetry into art, find a way of uniting the various versions of myself into a Grand Performance.  Ludicrous hope.

What I confronted was my inability to collaborate. Chaos makes me uncomfortable. I don’t like silence.  My discomfort grew throughout the night.  The first two pieces were small enough that they felt like actual conversations—I can handle conversations.  Create: Abyss and String as a duet.  A- and I used our bodies to create a fall into the abyss—she fell back into my arms (you’re a climber, she said, I trust you to catch me) and trailed her arm after like a string. Create: Abyss and String as a quartet, using your duet and adding language.  We joined our duet with the women next to us and created a chorus of voices to transpose our motion into language. The result was actually beautiful, and C-‘s last minute ending, repeating the final line in syncopation, was the perfect thing that I had nothing to do with.

Create: Gertrude Stein and Camping. Cue: discomfort. We stood in a circle, 5 of us now, chattering with wide eyes.  That’s not entirely true—no one looked panicked, but as we talked and talked I could feel my own panic rising. Where is the performance? What is the performance? We need a beginning, and a plan, and then an ending. What is Gertrude Stein and Camping? We can stamp for punctuation, we can assemble chairs, we can—why aren’t you saying anything?  Cue: woman being difficult. I’ve actively avoided Stein. Fine. But do something. Anything. I don’t know her work. It doesn’t matter. That group will do something like dancing, that group is writing furiously, and we’re here, talking. What are we going to do? Why am I the only one talking? Why am I directing this and—minute left—we need something. Here. This, we will do this.

I collaborate poorly because I am bossy. I fill silent spaces with words and direction, I strong-arm chaos into structure.  I also dislike improv games and I am uncomfortable being in front of anyone in theater.  These two things are at odds when the object is to perform and the group is in chaos.  Currie said of his collaborators, In the end, its people we like. You have to trust them. I don’t know that I like me. I’m uncomfortable and awkward.  I want to be the kind of person that throws her body to the floor and can spontaneously burst into sound, but at the same time I mistrust that person.  Too showy, too out of touch with motion that is relevant to the larger world, not just this room, and this art, and this moment.

I had hoped the workshop would help me understand how to unify the pieces of myself a little better, and instead I came home shattered into more pieces.  One piece that mistrusts workshop, another that relishes in the ability to dig in.  One that is angry with the way I take over, another that feels totally right and justified.  I text C- in my jumbled state and he writes back Maybe you’ve just outgrown workshop and I think no, no, no, I still know so very little. 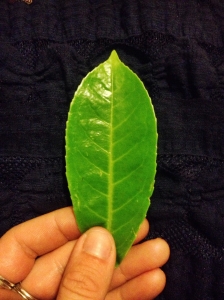 The Edge of Hedge

There were amazing moments, of course.  It was a workshop with Anne Carson, how could their not be, as Nicelle says, magic? Towards the end, at a break, I even worked up the courage to ask can I give you something? Sure. And I handed Currie and Anne a print from this summer, and stumblingly explained that I’m trying to find a way to connect my physicality with my text with my art.  They nodded solemnly and took my gift kindly and let me walk away before I turned any deeper shade of flushed.  At one point we had to bring back an Edge, and when I held our group’s leaf out (The Far Edge of a Hedge) she said you should make a print of it. Of course I will.

I’m not sorry I went, but while I was worried Anne Carson would disappoint me, it’s myself I find lacking.  Maybe that’s the way it should go when meeting an idol—we idolize people we aspire to be, so of course it forces a mirror in front of our faces.  Idols ask us—who are you? I am the woman who stood awkwardly at the end, hugged A- and said nice to meet you with no real way of getting in touch with her, butted into a conversation with Currie to say thank you, and scurried out the door.

In the end, I’m not sure.  I felt out of step with the rest of the writers in the workshop and it’s an echo of the way I felt during AWP.  Maybe I just don’t belong anymore—but if I’m not a poet, what am I? It’s been part of the way I identify for so long that I suspect the loss of Poet as moniker is more destabilizing than an uncomfortable minute long performance of Gertrude Stein and Camping.  Somehow, even though I’m feeling sort of shattered right now, Anne Carson gives me hope.  She is, after all, Anne Carson– just that seems hopeful to me. And she has a wonderful laugh.

Quick update: A– works with a good friend of mine! I love small world Seattle, and I hope to stay connected.