There are evenings I think of the ropes beneath skin and I want to unravel them entirely. Gnaw at my wrist for a point of entry and tease out the threads. I’m not saying I’m suicidal—I’m not. I lack the conviction of razors, though I have traced a pen knife across my forearms to make marks that looked like bramble trails. Once, too deeply, and blood beaded in the white line. I stopped that night and haven’t done it again since.  I’ve found other ways to feel alive.

The girl is made of water. The boy is made of glass. There is a table between them made of sand and it is spilling over its own edges. Golden streams of it, like sun through a window. She wants to touch the warmth of the table but knows it will clump in her hands and become something else entirely.

The day it snowed I woke to a quiet neighborhood, as if everyone decided to play dead for the day. But it’s impossible to be in a place like this and be truly alone, and soon there were other quiet-people moving along the snowed in sidewalks. All of us doing the same kind of tentative walk, uncertain of the ground, coming to the same place to wait in stamping huddles for the clanking, snow-chained bus.

I want this to be about where the bus took me, but it was only fogged out windows and humidity to downtown where I did the same thing I always do. Out at the third stop, up two blocks, one more to the right. In the door, up the elevator, prop open the front door.

So beauty is in the spaces between, because it has to be. That’s the only place left.

The boy is made of paper. The girl is made of fire. This can never work. The table between them can only last so long.

Some things are true—it rains a lot here. Dripping off of the eaves, into gutters. Sometimes just greyness, and basements full of mold. The pattern of its growth a kind of beautiful blush across old photographs and keepsake drawings. The whole thing has to be pitched, of course. My skin crawling, throat closing, gasping for clean air. But the photographs! Sodden box put to the curb to collect even more rain, and we can’t go back to before the mold covered the pages.

The awful truth- I’d forgotten about any of the photos until I saw them, and then I was devastated by their loss. There’s no logic in this. Sometimes it seems a house fire is a blessing of sorts. A chance to start over.

The girl is made of trees. The boy is made of air. Past the table the window falls open and he might be sitting there still but it’s hard to tell. In the end, really, it is just— she shivers, he gusts about. They intersect at points and then, not. 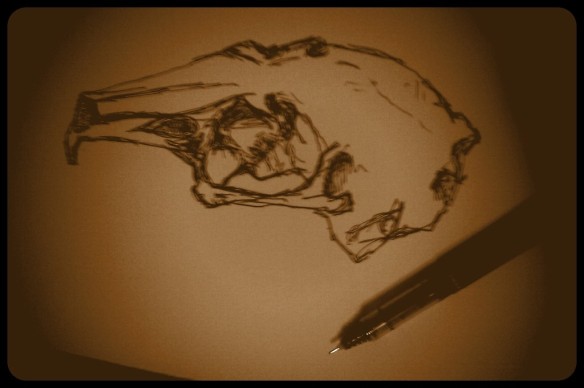