Went to Open Books for Brenda Hillman’s reading this evening.  It was packed, standing room only by the time she started, despite the blustery and rainy evening.  A lot of UW students were there, including some of the friends I’ve made.  It’s a strange place, to be friends with current MFA students in a program I didn’t attend.  They have been nothing but kind, but I definitely feel like a bit of an outsider sometimes.  I was talking to one of them about Forrest Gander (and his book Eye Against Eye, my pick for the poetry book club I’ve become part of) and Brenda overheard.  She brought it up later in the night, both as an example of a poet that “Aunt Zelda” would like, and as a poet who continually evolves and is currently on top of his game.  I instantly had to think back–had I said something contradictory to that and she was countering? I forget that conversations can be overheard sometimes. We all create our private bubble and it’s shocking when reminded- this isn’t a conversation that exists outside of earshot.  I was so concerned about what I might have said about Forrest (which, when reflecting back calmly, was just that I have a bit of a crush and I love his work, Torn Awake a bit more than Eye Against Eye, but still, I love all of it) that I didn’t realize until later that Brenda said she overheard students talking.  But I’m not a student anymore. And this, frankly, breaks my heart a little.

Brenda, before her reading, talked a lot about the importance of supporting local book stores.  Open Books is one of the reasons I felt I had to come to Seattle, and I love that I can just walk down a few blocks and buy from them.  I do try to get poetry from them rather than online, and for the most part, I can do it.  It was crowded tonight, but I plan on going back to get the next book club book there.  Rumor has it that Elliot Bay will be closing its doors in Pioneer Square, and I’ve heard that it’ll be moving to Capital Hill.  Still, it’s such a landmark- that it has to move at all is shocking.  And yet, not. So buy books from your local stores for your Aunt Zelda, as Brenda suggested.  I might head down to Open Books and do my shopping there- include with each book a letter about why I’m in Seattle, what I’m trying to do here, and why I’ve chosen to send poetry rather than cooking utensils.  Thanks for the suggestion Brenda.

(It’s pouring in Seattle. There are meteors showering tonight. Book club was at my house this evening, the wind is battering at my window. I love concurrencies.)

What bees and babes is this place luring?

(from Gretel and the Witch)

I have my very ow

n copy of The Ravenous Audience now, and I’m so glad to hold it in my hands. I had the great fortune to see this book along its way to book-ness. This is not a shy book, and it is not for the timid reader.  Kate tackles a lot, and she is unafraid in her words. There are delicate moments, but there are raw moments too. It’s a great collection, and I just wish that I was in Southern California to hear her read from its pages.  I guess I’ll just have to try to tempt Kate back to Seattle for a visit and a reading…

Seattle is a place of transplants. The Heroes show, last night and tonight at the Jewel Box Theater in Belltown (inside Rendezvous… but that’s another story) explores the idea of Not From Around Here in six personal essays where writers and artists and musicians collaborate to map out their own experiences within this city and others.

Maybe I’m partial, but Carrie Purcell’s segment was my favorite.  Her piece interwove third person personal essay and the history of the King Cello with cello music by Hana Mareckova, It was beautiful, and I’m very glad I stuck around Belltown to attend.  The place was packed into the aisles and everyone seemed to enjoy themselves.

It’s refreshing to be reminded that other people aren’t from around here either. That they have the same difficulties that I do, that they have the same worries.  Why did I come out here, is this really what I thought my life would be, how did I end up doing this thing?  Seattle is starting to be my home, not just a place I am staying, and I like that.  My housemate this morning mentioned something to the same affect- that I am taking ownership of certain things in the house were before, I was tentative.  I think I have little patience for tentative action now.  I want grand gestures, I want exclamations and affirmations.  I want things put in containers and not just open glasses placed on a shelf in the fridge.

I also continually want to share this place. I am not from around here, but I claim this as my own. I want to show you the rain slicked streets, the light refracting off of the ground. I want to show you the crack along the horizon as the sun sets and the rain clears for just a moment.  I want you to smell the perfume and sweat on the bus, to see the leaf as it blows twelve stories above the ground past the office window. I want you to hear the rain dripping through the ceiling and pinging off of the displays in the Great Gallery. I want you to leap over dips in the sidewalk with me, I want you to dance in the kitchen with me, to laugh with me as I tumble down the stairs. 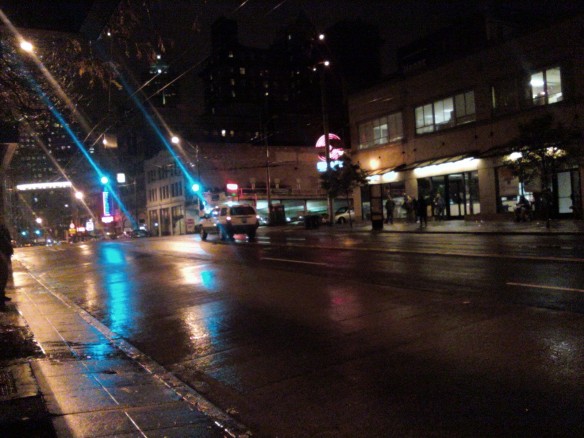 over painted, over lovely–

It was a perfect autumn evening when I walked home from A’s house on Halloween.  Near full moon, deep blue sky, orange street lights pouring over the leaf covered sidewalk.  My shoes barely made a sound, my skirt puffed out beneath my coat.  On almost every corner laughter spilled out of windows, glasses clinked and plates clattered.

It’s a few days later now, and the walk is still inside me somewhere.  Caught in my ribcage maybe, or tucked beneath my shin bone.

C picked an H. D. book for book club, and her simple lines have me excavating text again.  There is something satisfying about digging deeper and deeper.  About unearthing.

Apparently, in April of 2008, my work was the Web Monthly Feature at Verse Daily.

Current work appears in the November issue of elimae.