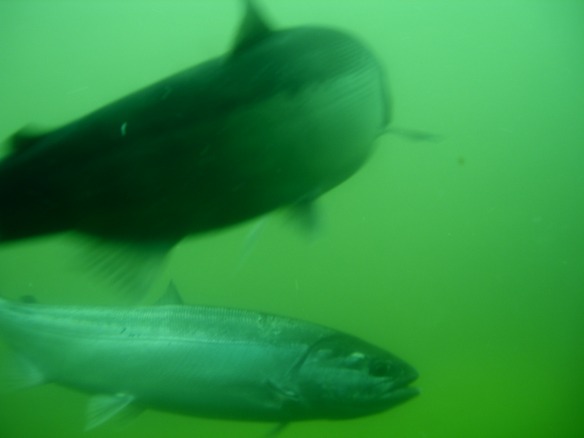 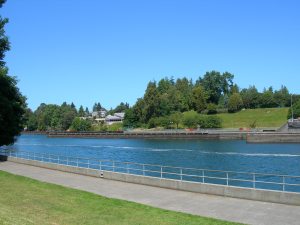 Outside a boy points There! There! and the gull takes off, wheels over the liquid surface, scum stripe gathered by current.  Sky is a hopeful blue.

I think, while walking above, that I could plummet so easily into the coolwatergreen.  Into the thick glass, into the fishworld.  But there is this metal bridge to cross and on the other side so many flowers and the rest of the day left to open. 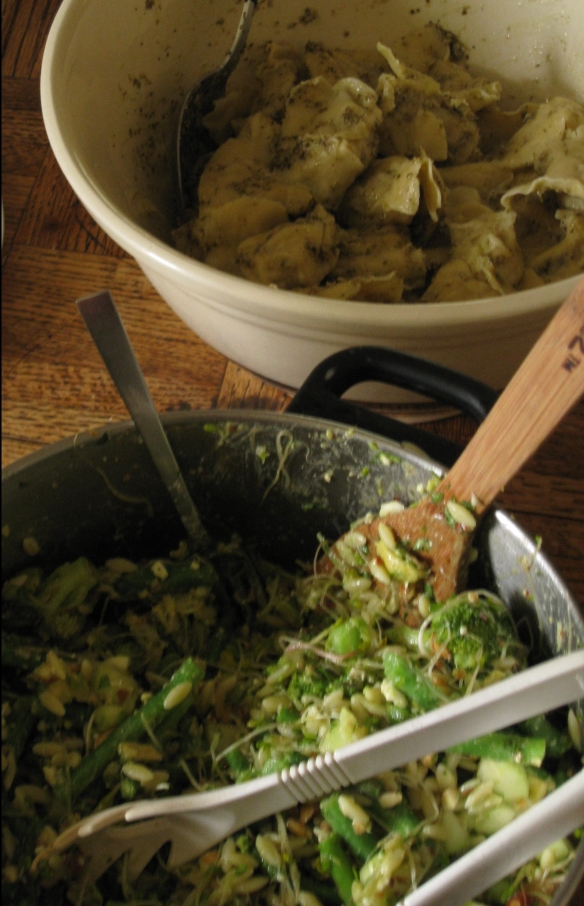 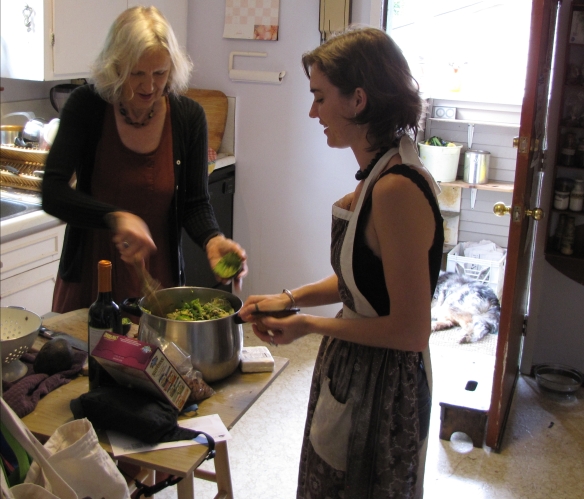 I’ve seen so many wonderful (looking) meals on different blogs lately, and I am glad I can finally post pictures of something I’ve made.  Part of co-op living is massive dinners, and when we cook we can invite friends.  My family was able to come, and surprisingly none of my house mates were at the meal.  Recipes were off of the internet, with a few changes and additions.

It turned out well, and people seem to like the left overs.  Someday I’ll have my own kitchen, my own table, my own candles and serve appetizers and host dinner parties.  Until then I’m happy with the people I get to share my meals with in the shared space I’m lucky to have. 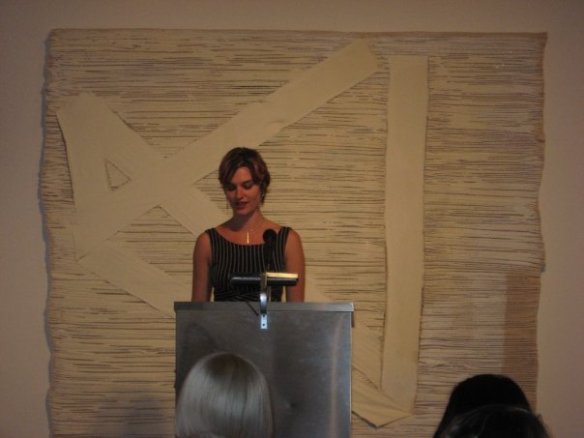 A bit over a year ago (see photo above) was the last time I read in a real reading.  I’ve done open mics since I’ve been to Seattle, but it isn’t the same as having your name in a program.  I’m not quite sure how to go about arranging readings here, or getting in on other readings.  I also seem to think I haven’t written much to read.  I’ve almost avoided reading pieces from my chapbook really.  Naomi Gal told us once to view our work as written by our little sisters.  We aren’t the same people today as we were yesterday, and tomorrow will be someone new again.  Looking at Letters Through Glass I couldn’t agree more.

However, I think it’s important to move beyond the When of my work and into the Work of it.  Yesterday a friend asked me to read to him over the phone, and I found myself dodging and weaving.  When did I lose my tongue?  Once I realized what I was doing I read, and sure enough, a few lines in I found the cant that feels familiar.  The Poet Voice.

I think I need the Poet Voice; the thing that separates my daily speech from my text.  I can feel the words sharpen and focus in my mouth and I like the taste.

In Riverside my basil plant Bazil meant a lot.  I watered and pruned and poured adoration, and I kept the poor thing alive way past when it should have been placed in the compost.  Dace brought home a small basil plant for me, but I picked up another, from Trader Joes, same as before.  Thus enters Bazil the Second.  This time around I have a much nicer house and more to love.

I’ve decided that the only things I’m going to buy that I don’t really need are going to be things that make me happy.  That sounds like a silly statement, and I don’t really go out and shop a ton, but I’m sure there are things that I purchase (like chapstick) simply because they are there.

Two new books are headed my way, and I’m excited:  Amy Wilson’s book and Kate Durbin’s chapbook.  Amy is an amazing artist that I met through a good friend, and I’m excited not only because I get to support Amy, but also because I get to have Amy’s work out here in Seattle.  Kate’s book is just breathtaking, and Dancing Girl Press has such a wonderful chapbook series that I’m overjoyed to support it.

I love things made by friends.  I’m spoiled- my friends are artists and musicians and writers, and I get to experience all of it.  A good friend just sent me his book and I devoured it in a day.  How did I become friends with such amazing people?  They are beautiful. 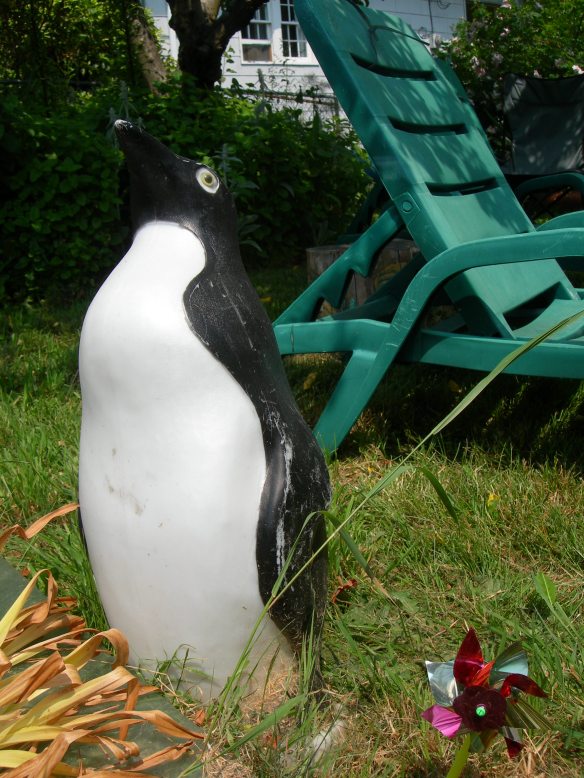 One of my favorite fairy tales is that of the Goose Girl.  It’s almost like several fairy tales wound up in one; drops of blood that lament the girl’s fortune, a talking horse, a traitorous servant, a false marriage and of course the earth kindly helping the heroine, from the wind to the mice.

At one point, while watching the king’s geese, the girl lets down her long hair and begins to brush it.  The little boy helping her wants to pluck a golden shimmering hair but she laughs and calls out for the wind to snatch his hat.  By the time he comes back to the hill where she sits her hair is done up and another day passes.

I felt much like the little boy in the story today.  I walked down to Fremont for groceries, ready for a stroll in the sun beneath my found red hat.  A few blocks from my house the wind kicked up wonderfully, but it snatched my hat.  Every time I tried again, there went the hat, spinning and tipping down the sidewalk.  Who is my goose girl, chanting for the wind to distract me? 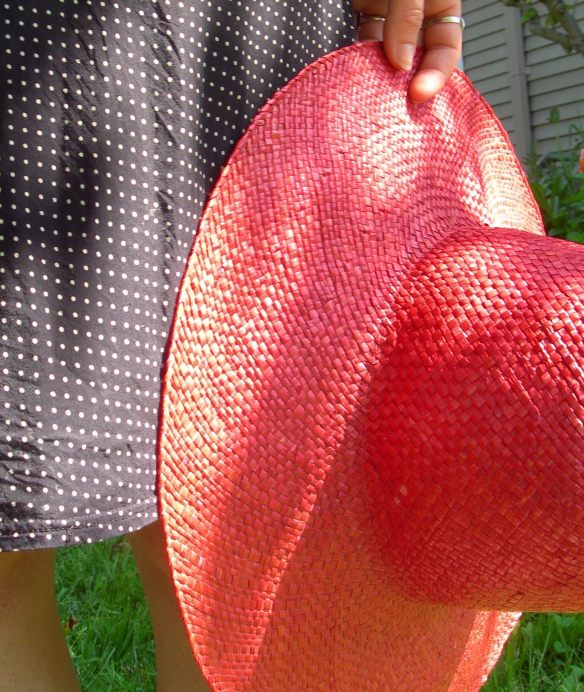 I’ve been reading The Ice Maiden at work, as though I need to balance the summer-ish heat with something cold.  The story meanders through the years and through the land, focused on Ruddy and his charming ways.  The Ice Maiden is at the edges, beneath the crevasses, her cool lips ready to kiss like death.

I would say that the women of fairy tales from from the turn of the century (if 1883 counts as the turn) disappoint me, but the men are equally shallow.  The women, even when good, are touched with evil.  Eve’s kiss is as deadly as the Ice Maiden I suppose.  The man is no better; Ruddy is perfect and charming and blessed but for no real reason.

It’s beginning to be summer, and I want the little magics.  I want the swirling foil of pinwheels to catch my attention, I want the rising swell of lightning bugs, I want the golden yellow light of porches as night mellows from cobalt to Prussian blue.   I have the sunsets, I’m working on the pinwheel, and I’ll have to just imagine the bugs with candles and Christmas lights.  I can make my own magic, and it doesn’t have to be sleight of hand falsehoods, a bright orange thumb to tuck a scarf into while the attention is held elsewhere.  I do agree with Gallagher, that’s one definition of magic, but there are other sorts too.